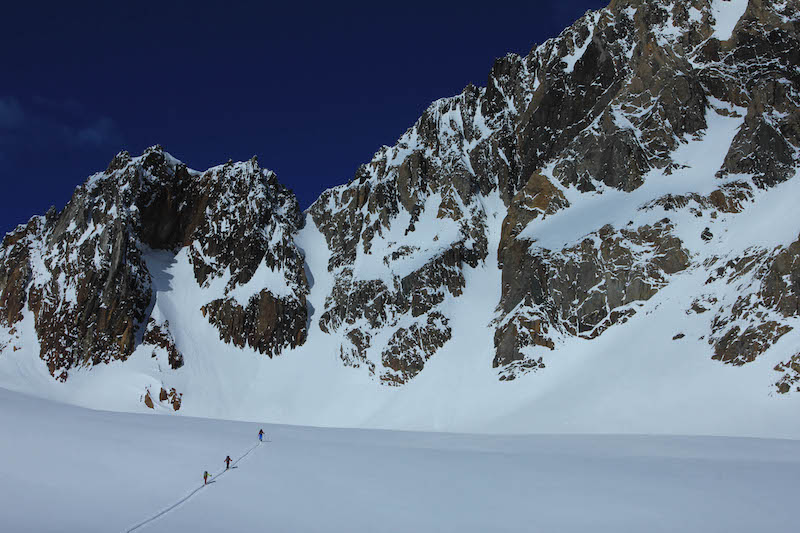 Skiing is part of my identity. Wherever I am, mountains bring me a sense of familiarity and are a source of inspiration. I was placed in ski boots around the time I started walking. For a while, I participated in competitive freestyle skiing, and briefly competed and trained at the international level. Eventually, I decided I’d had enough of the competitive routine – the focus was always on the next competition and accumulating points. The rules of those competitions were rigid and seemed, to me, designed to stymie progression and fun. I started skiing more with my friends, improved further as a skier, and had infinitely more fun just skiing for skiing’s sake. While attending Western Washington University, motivated by access to the unique terrain and mountain culture local the to Mt. Baker region, I progressed into backcountry skiing. There was no going back. 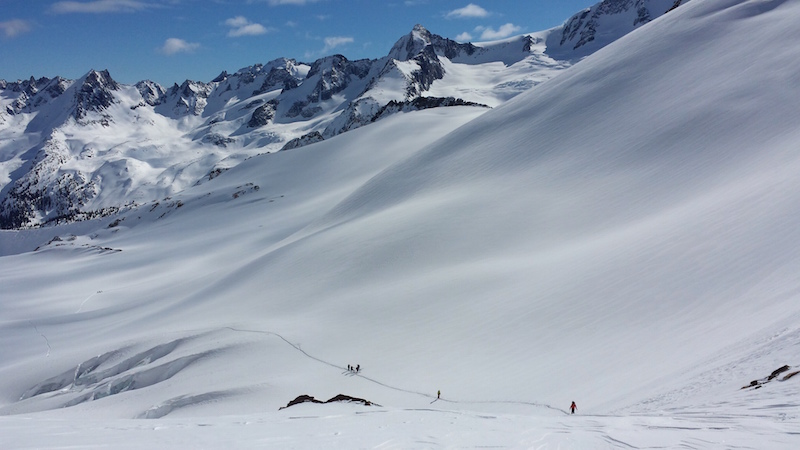 Moving through the backcountry in the winter is an inherently mindful experience. The strenuous, yet hypnotic aerobic rhythms of gliding across the snow, navigating your own path, for me, all add up to something akin to meditation. Every step requires balance and solid technique. Every sound, texture, gust of wind, and slightest change in weather can tell a story that may have dramatic consequence, demanding your consideration and respect. You immerse yourself in a stunning landscape often insulated by precious pockets of wilderness free of all signs of society. The rewards are life changing. All that’s required in return is a little sweat and your presence in the moment. I came to fully appreciate this truth during a brief 15-minute episode while on a seven-day trip to a remote section of the Canadian Selkirk Mountains known as the Adamant Range.

Just four more steps and I would be on the summit ridge of Mt. Sir William, ready to enjoy the long, powdery ski descent. Traversing upwards through a concave chute, I considered my next step, slid my ski in front of me, transferred my weight off of my back leg, and moved forward. My ski edge sliced through, and then compressed the snow. I heard and felt an abrupt change in the snow’s consistency from sugary dry powder, to a firmer slab of velvet. Whoompff! The soul-shaking sound of air abruptly rushed out of the snow as a thin layer within the snowpack collapsed beneath me. Was this a precursor to an avalanche?

I froze deathly still in my tracks as all feeling evaporated from my body. Time stopped. I retraced every step of the route that led me to this spot on the mountain, every observation, every conversation, and every decision meant to minimize exposure to risk. I assessed my position. While I was standing in a relatively safe spot, there was still a chance that if this slab of snow ripped away, I might be taken on a 3,000 ft. ride down this huge mountain face, only to stop on the crevassed glacier below, most likely encased within thousands of pounds of cement-like snow. Not a great outcome. I needed to move out of my current position via the shortest, safest route available. In this case, I had to continue upward. Time started up again.

Two heads peeked out like prairie dogs from behind the rock outcropping from which I had started this final traverse.

“Did you hear that?!” the prairie dogs exclaimed.

Less paralyzed now, I replied to my friends, “Most definitely! Did anyone bring an extra pair of pants?”

The feeling came back to my legs. I focused on executing simple, perfect steps upward. I stretched the final three steps into two highly motivated steps, gained the ridge, and then the summit.

I was immediately halted by awe. Sheer, craggy drops surrounded me in three directions. The fang-like peaks of the Adamants bit into the sky. The glaciated expanse of the Selkirk Range seemed endless. The lingering shot of adrenaline. I felt time stop again. This time, I contemplated the moment, seven years back, when I heard the violent pops, snaps, and rips in my knee, subsequently accepting as fact the idea that my days skiing were over. How five years later, after countless knee dislocations, two jobs, a recession, and some new legislation, I finally had a chance to address that injury. Then, the moment I awoke from my knee surgery and immediately slurred to the attendant three anesthetized words, “I’m going skiing!” I fast-forwarded from there through a montage of humbling rehab, grueling training, and all the faces of those who helped and encouraged me along the way. And here I was. My friends out of view below me, I stood tiny and alone atop this mountain hearing only the crisp wind, my breath, and the Styrofoam crunch of the snow under my skis. A grateful smile spread across my face. Time started again.

Through a handheld radio, I called down to my friends, letting them know I was on the summit and they might want to come check out the view. After some discussion, we unanimously agreed it was safe to follow. The others made their way up, one by one. I watched the expressions on their faces, each of them present in their own frozen moment in time as they crested this massive rock. Among the smiles, hugs, high-fives, and woohoos, there were surprisingly few words. Few words were needed. While each of us was having our own experience, it was obvious that something else was being shared. To oversimplify it, it was the sense of gratitude and community that radiates from presence in the moment. But, also, we still had 3,000 ft. of champagne powder to shred. 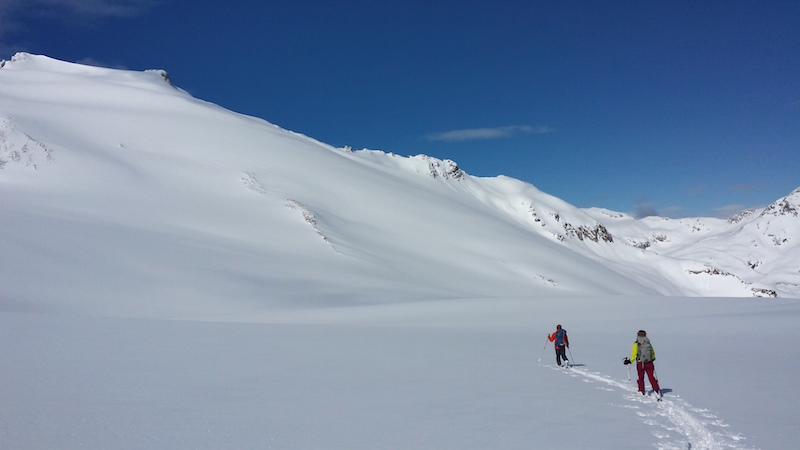